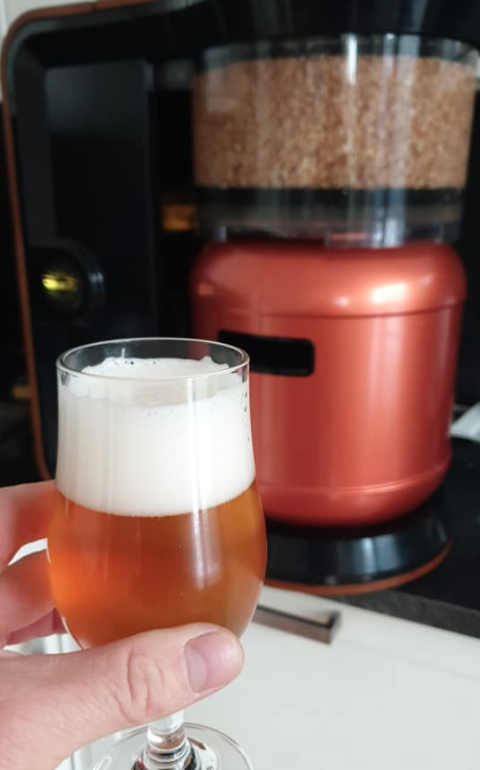 In the last month, a lot of exciting things happened. We’ve been working hard to release MiniBrew’s third production batch, expanding our team and ensuring the quality of our Brew Packs.

We’re pleased to announce that MiniBrew’s Batch 3 is now shipping. Early orders are leaving the factory today and shipping confirmation emails are starting to go out. We appreciate your patience while we’re ramping up the production of Batch 4 to make sure each MiniBrew CRAFT meets a high production quality.

We want to say that the Minibrew community has been spectacular. Your enthusiasm and feedback have been incredible, and we’ve seen lots of great pictures and videos shared by the community.

In the last 4 months, we’ve welcomed over 285 new customers, mainly driven by the new machines available for order. We’re blown away by the interest as batches 3 and 4 are already sold out.

On May 26th, we started selling another 250 units, which will be available in September this year. Batch 5 will be the same product as Batch 3 and 4.

Still, considering making a MiniBrew CRAFT your own? Check out what others have to say. 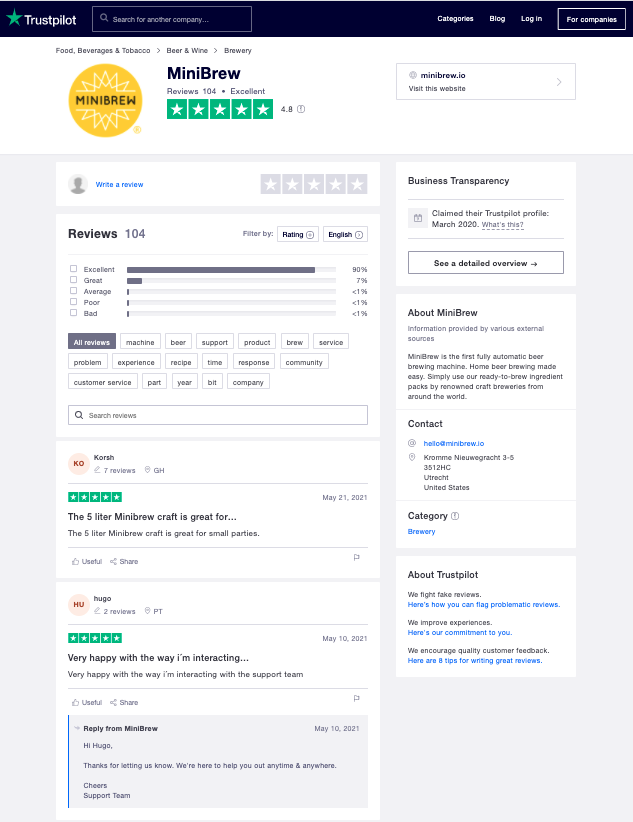 This month has been intense as we were supporting the assembly and testing of Batch 3 in China. Our team has been getting up at 5 or 6 am to align more working hours with China. Long days for the team, but well worth it! 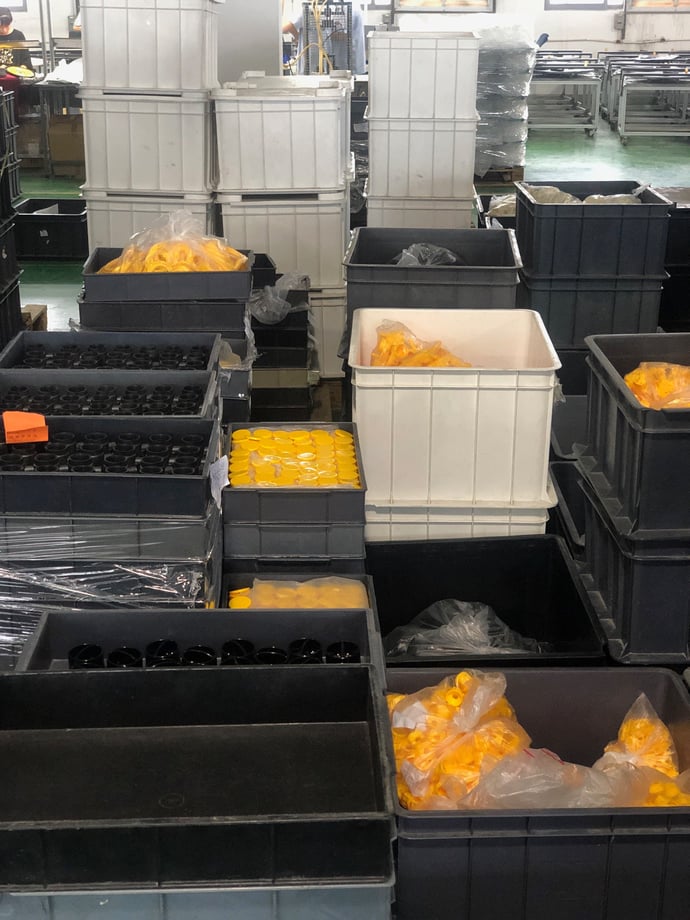 Before every production run, all materials go through Incoming Quality Control (IQC). This defines how many units we can make. Our goal was to produce 100 units (Batch 3), but eventually, we only received materials of the Smart Keg lid to make 50 units. We requested the vendor to deliver the remaining Smart Keg Lids. However, instead of waiting for late delivery, we decided to produce 50 units.

During the production, we discovered that a number of Smart Keg Lids have a larger turning angle than expected, with the result that your tap is above the fan cover when attached. Under specific predefined conditions, any angle above 120 degrees was not accepted. This resulted in 8 rejects of the 50 units.

A check-up of the Smart Keg Lid Angle during production

In total, the factory-made 42 units which were part of the Mass Verification Run that allows us to test the quality of the materials, assembly, and brewing to ensure they are up to standard before proceeding with making the other remaning machines. A few photos of the assembly line and the new CRAFT.

The production line of the CRAFT

A fully tested unit on the assembly line. The wood and side panels are added before packaging at the last station

To absolutely guarantee the quality is up to our standard, some of the units are exposed to our at Random Quality Checks before shipment. Here below a picture of the lab.

Everything has passed our tests. We're extremely happy to share that the shipment of Batch 3 is released for shipment, and we expect to have products at the end of June in our warehouse! Hopefully, there will be no boat blocking the Suez canal this time!

Currently, batch 4 is being produced will be finished for shipment end of June. Batch 5 is planned to produce in July and ship end of July. In general, it takes 4-5 weeks on the boat and we expect to have the products at the end of July in our warehouse in the Netherlands.

We have produced fewer units than planned in Batch 3 which has influenced the delivery schedule. Based on your order number, we have the following update:

We’re happy to announce that the Minibrew CRAFT and our Brew Pack portfolio will be sold at Olbrygging in Norway and at the Homebrewery.eu in Sweden. There will also be a physical location in Italy soon! All of our new retailers are part of Batch 4 delivery.

One of the above partners is using the CRAFT and made a video about it. We’re grateful to work with them as the video is invaluable.

The expansion into retail has taken a bit longer than expected, but we want to ensure that new MiniBrew users can enjoy the same seamless support and after-sales (repair) service we are providing to our current users.

We’ve been putting a lot of moving pieces together in recent months. As our user base is growing in terms of usage and machines registered, we’ve added new strengths in our Software, Quality Assurance, and Support Team.

On the support team, Maik joined in May. He will strengthen our support team and be available in the evening and on weekends. In the last month, he was trained in all non-technical questions and will be brought up to speed on the technical questions during the upcoming month. We hope he is fully operational by the end of June.

On the quality assurance side, James has joined in May. James has been with MiniBrew before and we’re super grateful to have him back on the team. James will focus on handling the technical questions during the week, and guide, define and test the new development on our software side.

On our software team, Guido and Casper started in May. Both as part-time, one full-stack developer and the other as infrastructure developer. Renee joined to help us out as a part-time firmware developer. Depending, on the need we can scale the amount of hours of each person to create extra bandwidth within the software and the QA team to help us push new features and further stabilize the platform.

Instead of keeping you wondering when a new feature has been rolled out, we will keep a changelog on our help desk, so you can discover what’s new.

We resolved some small bugs in our backend as we noticed that some Smart Kegs couldn’t connect after update 3.1.8.

From the summer, we will be working on the following issues, among others:

In the past month, we've been restocking several of our Brew Packs, which means that the Gulden Craen, Don’t Leave Me This Way, Wiltenburg Lager, and Get To The Hoppa are available for purchase again with the freshest ingredients.

The storage conditions are listed below:

Moving forward, we’ve been getting many requests to expand the portfolio with new Brew Packs. Last year’s focus has mostly been about maintaining the quality of the current Brew Packs, this year we want to focus more on releasing new ones as well.

Bird Brewery and Stapzwan Brewery have informed us that they wanted to create a new recipe that will (possibly) replace the Wingman Robin and the Stapzwan Porter. Ultimately, we want to add new breweries to the portfolio or maybe even a recipe made by one of you guys!

We’re almost at the end of the update. Just a few housekeeping details. We’ve been updating our help center articles, shifting a few of them around, and working on the integration of technical support via the chat versus filling out a form via an external website.

Next to that, Richard, Eelco & Frederik have put together multiple guides on Facebook Support page. They have done incredible work to help fellow MiniBrewers with user tips and tricks. Guides can be found in the top navigation.

In the next update, we’ll tell you more about Batch 4. We hope you enjoy this update. If you have any remarks, let us know in the comments. Thanks as always, and keep MiniBrewing.